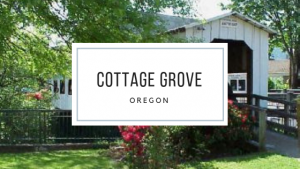 Cottage Grove is the third largest city in Lane County. The city was incorporated in 1887, but the people living on the east side rebelled in 1893 and founded East Cottage Grove

Arts and Culture of Cottage Grove

The largest festivals in Cottage Grove are Bohemia Mining Days, the Western Oregon Exposition/Cottage Grove Family Fair and the Covered Bridge Festival. In 2018 Cottage Grove tried to beat the world record for largest Toga Party, which was celebrated in the Bohemia Park.

Cottage Grove is known as the “Covered Bridge Capital of Oregon” with six covered bridges near the city. Five of the six bridges, Chambers Covered Bridge, Currin Bridge, Dorena Bridge, Mosby Creek Bridge, and Stewart Bridge, are listed on the National Register of Historic Places. Centennial Covered Bridge is a replica bridge constructed from materials salvaged from dismantled bridges. The Swinging Bridge is a historic suspension footbridge.

If you are looking for more fine dining check out the Stacy’s Covered Bridge or the Seasons At The Village Greens.

Why Work With Homes By Genevieve?

Because we offer unparalleled, local experience. I know the area and the local market better than anyone else.