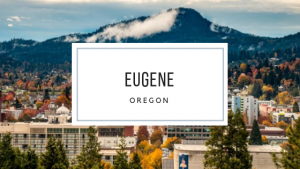 The Story of Eugene, OR

The first people to settle in the Eugene area were known as the Kalapuyans, also written Calapooia or Calapooya. French fur traders had settled seasonally in the Willamette Valley by the beginning of the 19th century. Having already developed relationships with Native communities through intermarriage and trade, they negotiated for land from the Kalapuyans. By 1828 to 1830 they and their Native wives began year-round occupation of the land, raising crops and tending animals. In this process, the mixed race families began to impact Native access to land, food supply, and traditional materials for trade and religious practices.

It is located at the southern end of the Willamette Valley, near the confluence of the McKenzie and WillametteRivers, about 50 miles east of the Oregon Coast.

Eugene is home to the University of Oregon and Lane Community College.It is also referred to as the “Emerald City” and as “Track Town, USA”. The Nike corporation had its beginnings in Eugene.

There are many family events throughout the year including  Celebration’s, fair, winery tours, craft beer and community campouts. Children and adults alike can enjoy the stunning wildlife Cascades Raptor Center. There are 72 parks and many jogging trails throughout the city, promoting a healthy lifestyle for all residents.

Many local farms are located in the area, with produce available directly and at weekly farmers markets.

According to Eugene’s 2015 Comprehensive Annual Financial Report, the city’s top employers are:

Why Work With Homes By Genevieve?

Because we offer unparalleled, local experience. I know the area and the local market better than anyone else.